Oh when will it ever end? The World? No the freakin’ End of the World predictions.

Well, looks like December 21st is another scheduled termination date for the big blue marble. So in honor of the world ending (yet again), I thought I’d just (repost yet again) what I reposted back in October 2011 when the world was supposed to end. I have a sneaking suspicion I may be posting this same blog again sometime in the future. I

Depending on how things unfold on December 21st, this may be my last blog post. You see, the world is on a collision course with The End – and I assume I won’t have Internet access to post anything. Personally, I thought the world ended on Tuesday with Arsenal’s utter collapse against a team that ranks 65 places below them. And of course, true to form,

Mean Woman has the answer. It’s the only plausible answer I’ve found.

Since Thursday night, there has been little discussion among political junkies and pundits about anything other than President Obama’s dismal performance in his first debate against Mitt Romney.  Everyone is asking, What happened?  Where was Obama?  Why was such a smart, skilled, talented orator so subdued and seemingly detached that evening, while his opponent seemed to run circles around him?

I haven’t heard any good explanations, or really any explanations at all.  But I think I’ve figured it out.

Besides being the night of the first Presidential debate, October 3, 2012 was also Barack and Michelle Obama’s 20th wedding anniversary.

And as much as many of us admire President Obama, he is still human.  He is a man.

And what do men often do when it comes to anniversaries?  HE FORGOT!

Well, he did remember at the beginning of the debate, as he wished his lovely wife a happy anniversary…

I awoke this morning with a tremendous pressure on my brain. It was as though something needed to escape… an embolism of good intent swelling against my better judgement. It was insight that had to be shared. It was a Chronic Advice Fart.

END_OF_DOCUMENT_TOKEN_TO_BE_REPLACED

The Republican National Convention is about to start and there’s a storm a’brewin’.   Yes friends, God is pissed and she ain’t gonna take it anymore.

END_OF_DOCUMENT_TOKEN_TO_BE_REPLACED

Some say Obama is a savior and some say Obama is the devil. He’s really neither. What he is is the guy whose had the balls to actually put a reasonably fair plan together.    END_OF_DOCUMENT_TOKEN_TO_BE_REPLACED

More than half of the population of the USA believe in the existence of life outside of our little blue marble. For scientists, the definition of “life” includes microscopic critters that they would wet their khakis to discover. If they found a two micron wide fossil of mold in the frozen poles of Mars it would change everything we know and believe about our universe.

My wife and I, however, have all the evidence we need and it is on clear display just 25 miles outside of Las vegas. Since neither of us are ‘scientists’, our vision of life outside of Earth includes a spaceship, funny humanoid shapes, and of course a British accent. All aliens have British accents. I don’t know why extraterrestrials have British accents, because as I’ve clearly stated, I am not a scientist. END_OF_DOCUMENT_TOKEN_TO_BE_REPLACED

If you really believe in Rick Santorum's Crusade. Wear the T-Shirt

Rick Santorum has gone beyond amusing. He is now approaching dangerous. He’s even scaring the right-wing of the Republican party and that really takes some doing. Comparisons to the Ayatollahs of Iran is inevitable.

If the Christian right is happy to have a crusader on their side I would like to suggest they think this through. I realize that’s asking a lot of people who do a lot of blind following. But please consider how you would feel if the next president was proselytizing for Islam, or Wicca or worst yet Atheism! 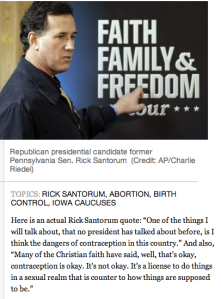 The GOP presidential candidate is against non-procreative sex -- even for married couples (Credit: Irin Carmon at Salon.com)

Our country was founded by people who were fleeing England because they chose not to follow a state religion. Santorum’s views and politics will make Christianity our new state religion. Not just any Christianity but Santorumanity, Rick’s view of Christianity. There are too many versions of Christianity to count in this country and each thinks it’s “THE ONE”. Rick Santorum is sure that his is the right one. When he has the ability to sway secular laws to enforce religious views, your flavor of Christianity might not win. Sound familiar? That’s how theocracies work.

Santorumanity is Rick Santorum's own view of Christianity

It’s been pointed out to me that some readers have taken my post, “Top Ten Obama Socialist Programs and How They Can Be Eliminated”,  seriously.

Sorry folks, but that was satire and my attempt to point out how the term socialism is being misused.

I was trying to make the point that social lifelines and especially guaranteed national healthcare should be as ubiquitous and taken for granted in this country as having a fireman come to your house to put out a fire.

None of our social programs is socialism. However, the far right and the Tea Party folks like to misuse the term to scare people and sway elections. No one in their right mind would consider doing away with fire, police, military, public schools, the FDA, or the EPA …except Rick Perry, and I already said no one in their right mind.

When you hear the far right screaming about socialist programs and “ObamaCare” think about our seniors on social security and medicare. The same type of opposition was screaming the same empty rhetoric when those programs were first introduced. Presidents Roosevelt, Truman, and Johnson were painted with the same knee-jerk  labels. But today in historical perspective we say how farsighted these presidents were and what great programs they helped start.

It is shameful on a monumental scale that we are the only prosperous nation on the planet that doesn’t guarantee health care for all of its citizens.  This is not a new debate. It’s been going on for over 70 years.

In January of 1943 , President Roosevelt, in his state of the Union message, called for social insurance “from the cradle to the grave.”

It wasn’t until July 30, 1965 that Medicare (as part of the Social Security Amendments of 1965) was signed into law by President Johnson. That’s a 20 year fight just to get something passed that we all take for granted now.

Social Security was signed into law in 1935 and was patterned after similar systems operating successfully in Europe, including Germany’s system which started in the 19th century. Sound familiar? Every European nation offers healthcare to all.  Germany started theirs in 1883 and England in 1911.  At the rate we’re going my guess is we’ll be arguing about this for another 40 years and then our great-grandchildren will accept it as normal, just like police and fire protection.

Since yesterday’s post was on socialism I thought we should have a snappy song by the brilliant Roy Zimmerman. Enjoy and share with your friends. 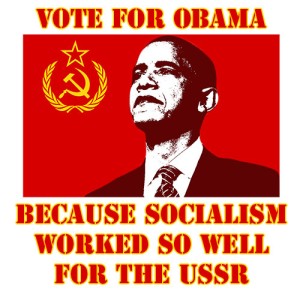 Let's eliminate all the socialist programs!

I am just sick and tired of the constant promotion of socialism in our great democratic nation.  Just Google “Obama Socialism” and you’ll get over 3 million hits. I think that speaks for itself!

In a short 236 years our country has gone from a freedom loving (except for the slaves) country to a communist, socialist, Marxist state where my hard-earned dollars are ripped from my hand to pander to the lazy and shiftless and the wealth is spread from the “haves” to the “lazy.”

What are we? France? Canada? England??

I am taking up the cause to not just stop our illustrious leader from adding more socialist programs but to start eliminating the ones we already have! Please forward this list to your legislators and put them to work getting back to basics right now! END_OF_DOCUMENT_TOKEN_TO_BE_REPLACED